Deposit $300 (required upon registration). Cost includes tuition, fees, food, lodging and transportation to field sites from Auckland. Cost does not include airfare to the North Island. Students will be picked up and dropped off at Auckland Airport (AKL) for the 4-credit camp. For the 3-credit camp  students will be picked up in Aucland (AKL) and dropped off in New Plymouth (NPL). As of October 1, 2019, students will need to request an Electronic Travel Authority (ETA). Learn more here https://www.newzealand.com/us/visas-and-immigration/

Our home for the duration of the camp is Taranaki, North Island, New Zealand.  From here, we will examine through three mapping projects the Neogene development of sedimentary basins and their fill due to the complex interaction of the Australian and Pacific plate boundary.  With satellite visits to the Wellington and Wairarapa fault zones, karsted topography and the glowworm caves of Waikato, and UNESCO world heritage site Mount Ruapehu and Ngauruhoe of the Taupo volcanic zone, our understanding of the complex and diverse geology of New Zealand will grow.

The Neogene sedimentary basin fill in Taranaki is spectacularly exposed along the western coast of the North Island, New Zealand.  This is an opportunity to learn about the stratigraphic and structural evolution of volcaniclastic and siliciclastic intervals that can be traced offshore to producing gas fields.  The processes of sediment transport and deposition and stratigraphic architecture of marine deposits including channels, levees, lobes and seismic-scale mass-transport deposits will be featured from continental slope to basin floor, and will include visits to the world-famous Mount Messenger Formation along Pukearuhe Beach.  Subsurface data including seismic data and well logs will be used to illustrate key points on the structure, tectonics and overall formation of sedimentary basins.

The three-project course is designed to provide students an opportunity to compare and contrast the complex basin architecture and sedimentary deposits in an overall hybrid foreland basin setting.  Key methods pertaining to source-to-sink sediment transport and sequence stratigraphy will be emphasized throughout the course.  Students will be introduced to geologic risks in energy resources exploration and development, including those pertaining to oil and gas drilling, as well as recent publications on these New Zealand basins featured in numerous PhD dissertations and the research journals Marine and Petroleum Geology and AAPG Bulletin.  These outcrops have been applied as analogs for decades to help understand the subsurface geology in both active and passive margin settings.

Key mapping exercises will emphasize preparation of stratigraphic columns, geologic maps, structural cross sections, depositional system models, stereonets, and completion of formal reports.  Successive projects will involve greater geologic complexity, and one project will emphasize the assessment of energy resources.  Practical applications to mapping and interpreting subsurface geology, including resource exploration and development (i.e., new ventures, exploration, development and production of oil and natural gas), are emphasized.  These skills are also extensively used for mapping the subsurface in the broad field of environmental sciences.  Diverse data sources and mapping techniques will prepare students for roles in industry, government and academia.  Further, interactions with professional geoscientists during the trip provide a panel of perspectives about what it is like to live and to work as a geoscientist in New Zealand.

This course will give students an understanding of the broad scope of sedimentary basin analysis, sedimentation, stratigraphy, structure and geophysics.

By the end of the course, students will be able to:

Physical demands: Field work will involve mapping remote areas and will include daily hikes of considerable length.  Students should be physically and mentally prepared for work in coastal and mountainous terrain in and around the areas of Taranaki.

Climate: Weather on the North Island during the summer months is generally fine.  However, students should be prepared for hot days (90° F / 32° C), and cold, rainy weather (45° F / 7° C) during storms.  Students should respect the variability in the daily tides and frequently changing weather patterns in the mountains.

Facilities: Lodging for the program will be cabin camping in holiday parks equipped with modern shared facilities.  Our accommodations will roam with us, from the New Plymouth area, to Lower Hutt, to Mokau, to Waitomo and to Tongariro.  Students will need to supply their own bedding (sheets, or sleeping bag).

Other required equipment:  Basic geology tools including hammer, hand lens, write-in-the-rain notebook, map case, colored pencils, Brunton compass (or equivalent) tuned to the declination of the southern hemisphere.  Students will need a laptop for written reports.  Suitable clothing for working in hot, coastal environments and cool, mountainous environments including wide-brimmed hat, sun-proof shirts and pants, sturdy boots and appropriate socks is required.  A complete and detailed equipment list will be provided for students ahead of the camp

Select images of the field mapping areas stretch along the coastal areas of New Zealand.  The majority of the mapping will occur along the beaches of Taranaki, where the outcrop exposures provide exceptional access to view the broad variation of Neogene sedimentary basin fill and evidence for Miocene to recent tectonism. 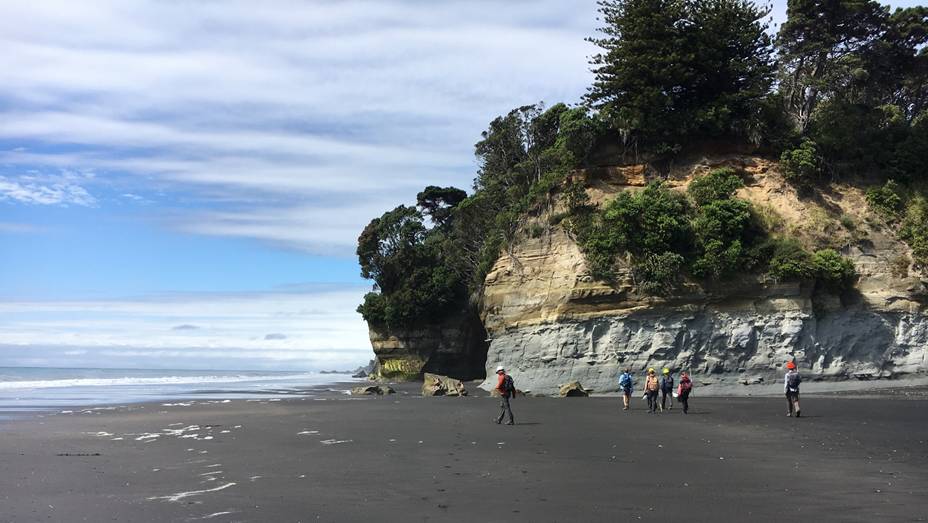 Conglomerate, sandstone, mudstone and various types of carbonate rocks are common deposits that accumulate in marine environments and are the products of diverse sedimentation processes.  Because of their variable porous and permeable nature, these deposits also form reservoirs around the world in active and passive margin settings.  Mapping and interpreting their characteristics using first principles helps to interpret the history of sedimentary basin fill and to build depositional models.  Most of our mapping occurs along modern beaches and wave-cut platforms, such as Waiiti Beach (above

View south from Tongaporutu River of the Upper Mount Messenger Formation outcrop exposures in the 250-m-tall Whitecliffs.  These deposits are interpreted to represent a submarine apron near the base of slope.  These marine depositional systems will be compared and contrasted with perched, ponded, and stepped continental slopes, as well as variations of submarine fans including fan valleys and unconfined fans during this field course.  Mt Taranaki is in the distance (far right) with a cloud at its summit. 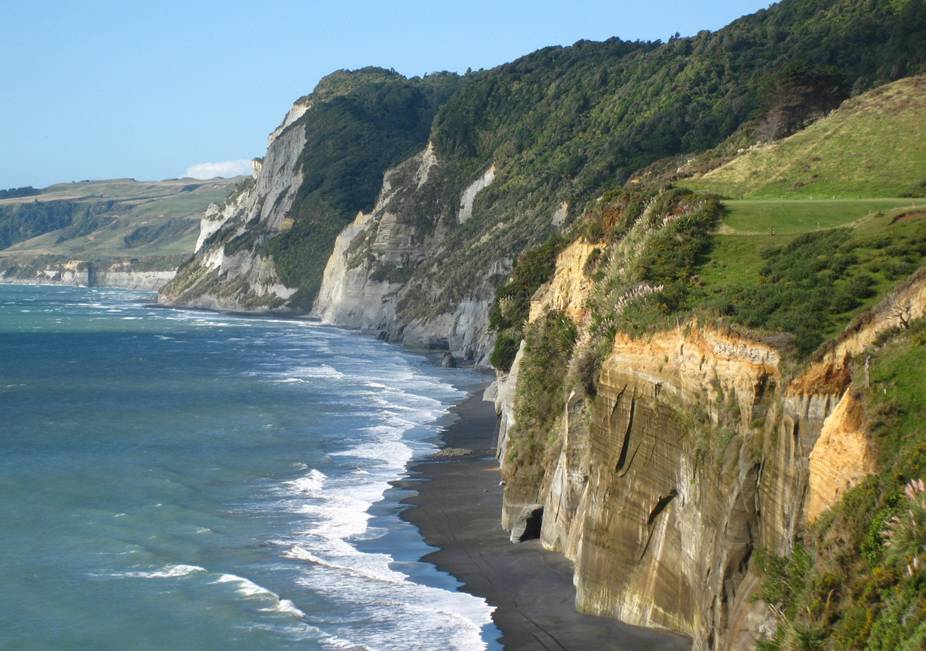 View from a Maori settlement known as a pā overlooking the black-sand Pukearuhe Beach and the Tasman Sea, North Island, New Zealand.  Pukearuhe Beach is one of the prime outcrop locales to observe the deep-water slope deposits of the Miocene Mount Messenger Formation and is located approximately 40 km (25 mi) northeast of New Plymouth.  This channel–levee and overbank succession is comprised chiefly of turbidites and extends into the subsurface of the Taranaki Basin where it has been a producing interval in several fields for decades.  Today, the deep-water Miocene outcrops exposed along the coast of the Taranaki Basin serve as valuable analogs for other fine-grained, heterolithic, poorly indurated, litharenite petroleum reservoirs around the world. 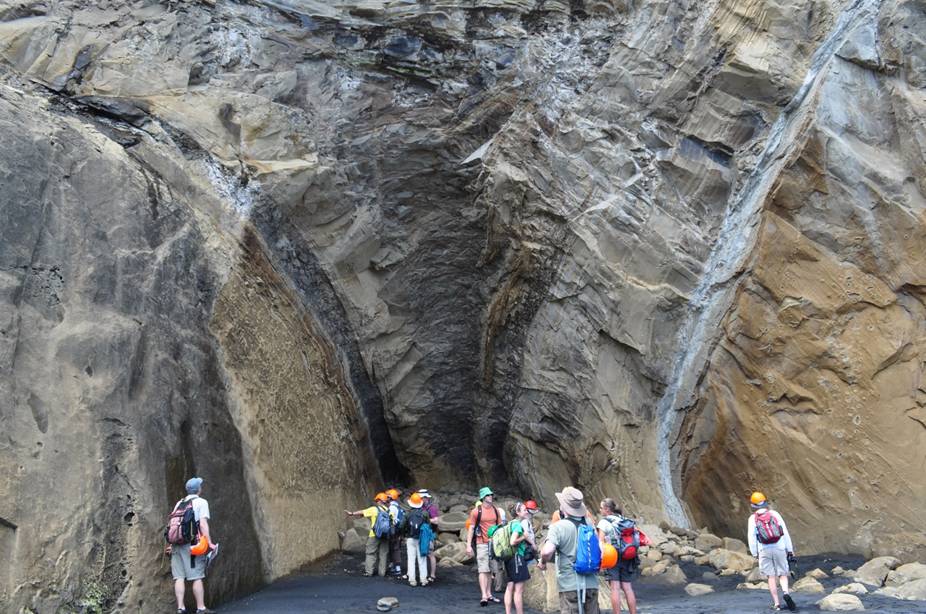 The seismic-scale mass-transport deposits (MTD) of the Miocene Mohakatino Formation provide a unique window into the architecture of these contorted and overturned masses of sandstone, siltstone, and mudstone.  Structural analysis of the folds and deformation bands in these strata are useful in interpreting their movement.  MTD result from the largest sediment movements on Earth, and form upwards of 50-70% of some continental margins and about a quarter of all continental slopes on average.  Deep-marine environments represent the final resting place for sediment on Earth and are important to understand as the ultimate sink for a number of elements including organic carbon.

The course concludes with a visit to the UNESCO world heritage site Tongariro National Park.  Tongariro is home to Mt Ruapehu and Mt Ngauruhoe (Mt Doom in the movie Lord of the Rings) and represents the boundary of the Pliocene to modern Taupo volcanic zone (TVZ).  While the TVZ wasn’t actively feeding the Taranaki Basin during the Miocene, submarine andesitic volcanism played a key role in feeding voluminous amounts of sediment into Taranaki during the late Miocene.

Back to main page